Plans for an industrial railway between the Metropolitan Water Board’s pumping stations and coal wharf were first compiled in 1912, with board approval being attained just prior to Christmas 1913. The Deputy Chief Engineer estimated the project would cost £17,000 for a 2ft. gauge railway, running over some 3 ½ miles of track. In addition to moving coal around more cheaply, the railway could be further used for furnace ash disposal and reservoir duties.  At the time, the Cornish Beam and Bull engines were burning about 109 tons of coal a day in the six Hampton pumping stations, and a further 38 tons at Kempton Park.

The railway required 200 tons of 35 lb. flat bottom rail plus 320 feet of tram rails being laid on Baltic Fir creosoted sleepers. Work to build the line was completed in 1915. To work the line, three locomotives based on M.W.B. engineers’ specifications were ordered from Kerr Stuart and Company of Stoke-on-Trent. They were named Hampton, Kempton and Sunbury, costing around £700 each. Livery was green with an unusual triple striping. Although running on 2ft track, the locomotives had a width of 6ft with an overall length of 15ft and a weight of 10 tons. Sadly none of the original locomotives survived. 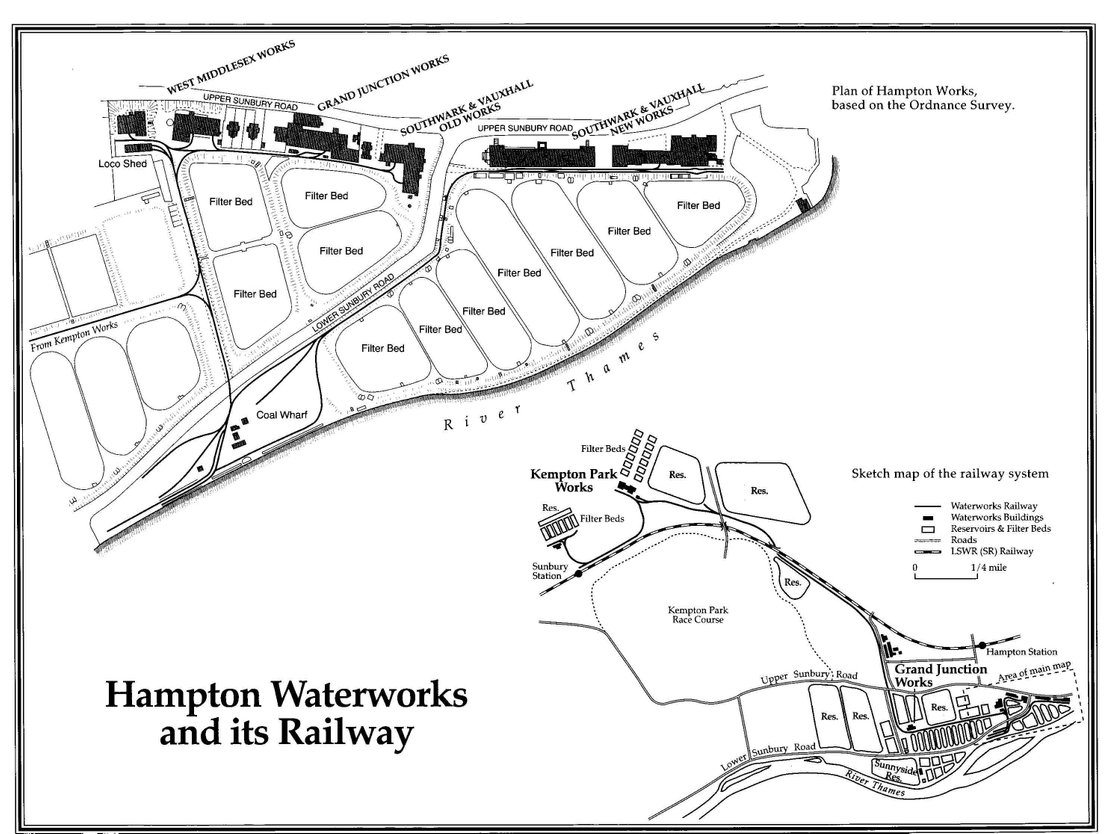 The locomotives hauled a fleet of about 140 Vee-shaped tipper wagons and some flat trucks. On the 15 to 20ft sharp curves, these wagons required hand pushing into the boiler houses. The locomotives were required to cope with 40ft. curves and had re-railing bars fitted at both ends!  Only two engines would work on a daily basis, with one delivering coal to the boiler houses and the other performing shunting duty at Hampton Coal Wharf. This method of operation meant that signalling was not needed.

The system had three branches. The first ran south of the Lower Sunbury Road to the Riverdale and Moreland’s buildings at the Eastern end of the Hampton site with the remaining four pumping buildings along the Upper Sunbury Road being served by the second branch.  Kempton Park pumping station was served by a further two mile branch. Gradients under the Upper Sunbury Road bridge reach 1 in 20. The track bed still exists running in a cutting adjacent to Oldfield Road. It turns left running parallel with the Shepperton line, before sharing an under-bridge with the Staines aqueduct. There used to be a twin track level crossing at Kempton Park Lane. Beyond this point the original track bed has been overtaken by modern workings.

In the 1930s more efficient pumping engines were being introduced and electric conveyor belts were being installed to carry coal around the Hampton Works. As a result of this modernisation, the MWB railway system was finally dismantled in 1947 having had a working life of 32 years.